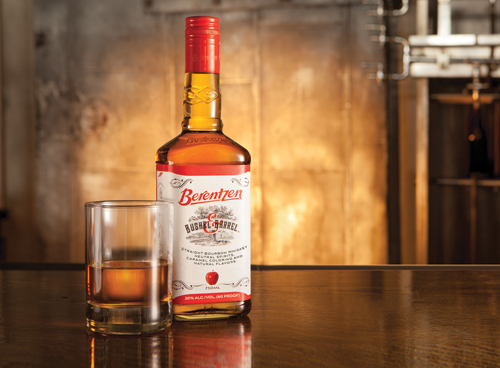 We went into tasting Berentzen’s Bushel & Barrel after having tried a number of other whiskey-apple combinations. Unfortunately, that was the wrong approach, as the spiced-apple spirit Berentzen has made is completely unlike any other brand out there.

For starters, it’s much stronger than some. While Jack Daniel’s Winter Jack – billed as a Tennessee cider – ranks at about 15% ABV, Bushel & Barrel rings in at 30%. This is also substantially less than others, like Jim Beam’s Red Stag Hardcore Cider and its cough-inducing 40% ABV.

The small difference – more than one but less than the other - actually lends to Bushel & Barrel’s drinkability. Winter Jack can stands on its own with ice or warmed up because It IS a cider and there’s little alcohol to note. Red Stag on the other hand tastes like a flavored whiskey (which is what it is), the apple is only the supporting character and even then its role is minimal.

But Bushel & Barrel splits the combination right down the middle. On first sip you get huge apple flavors that compete immediately with Kentucky Bourbon. It’s a really flavorful combination that seems to wrestle at the outset, but then the two flavors make peace and the result is a great, edgy drink that is perhaps more flexible as a result.

Unlike Winter Jack for example, Bushel & Barrel can be added to warmed apple cider on a cold night. Winter Jack would simply get lost – it’s so much more apple than anything else that you couldn’t tell it’s even there. And Red Stag, while great to sip, really overpowers the delicate cider it’s added to – little cinnamon or clove will come through, just whiskey with an afterthought of apple.

Bushel & Barrel, on the other hand, is just strong enough to remind you it’s there. Added to warmed cider it cuts the winter air and quickly warms you up. On ice it’s strong enough to sip as a decent stand alone. Mix it with something like ginger ale, and you have a great tasting apple fizz (even better, use it in your next Washington Apple).

Of the three we have to say that Berentzen’s creation is probably the best all-around whiskey cider we’ve tried. And really that’s no surprise considering the age and history of the maker (Berentzen’s been around for a couple of centuries now and is known for their liqueurs).

Any of these three choices would be great selections for a cold night this winter, but the next time the snow's falling we’ll probably reach for the Berentzen Bushel & Barrel.