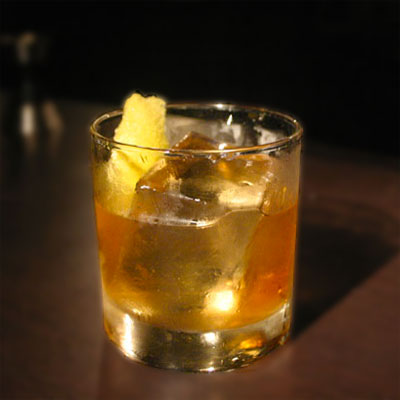 We did find two, however, that mastered the Old Fashioned, and it’s worth noting that they did so in entirely different ways. One was classic and exactly what we would imagine was served in the early 19th century. The other applied modern advances in mixology to its design and ingredients.

And both, though unique in approach, were so precisely mixed that the most discerning of Old Fashioned drinker would appreciate their differences while savoring their taste.

But before we get into the details we want to visit the general history of the drink.

However, the general recipe for the Old Fashioned (sugar, whiskey, bitters, plus garnish), has been around much longer.

In 1806 in response to a reader’s query “What is a cocktail” the editor of a Hudson Valley newspaper replied that it was a drink containing spirits, bitters, water and sugar.

This basic cocktail recipe, in other words, was what we now call an Old Fashioned..

By the mid-1800’s it was common for barmen to add other ingredients, including orange curaçao or absinthe, and to include garnishes like lemon peels, orange peels, and cherries.

It was in this period that we begin to see what we think is the origin of the name. Customers asked for an “old fashioned” cocktail, meaning a drink of spirits (usually whiskey, which was the most popular of the day), bitters, sugar and water.

It’s easy to imagine that the name would stick, and someone would eventually just order an “Old Fashioned” and truncate the “cocktail.”

And so was born the Old Fashioned.

The drink has come roaring back into style with the popularity of mixology and the cocktail culture. It’s a great drink that blends the subtlety of the spirit with the sweet-bitter mix. Marry these with the hint of a fruit garnish and the drink is a superb reflection on the inherent complexities of cocktails.

So what two barmen did we find that could pull this drink off?

The first was Adam Weprin, the manager of Bridge Café in Lower Manhattan. Adam’s approach was classic, which is fitting considering the bar he’s in. The building housing Bridge Café, which sits in the shadow of the Brooklyn Bridge and is a stone’s throw from the Southside Sea Port, was built in 1794. The three-story, clapboard building began life as a grocer and porter-house.

Then in the 1840’s it was converted to a saloon and brothel, and it’s been serving booze ever since.

Adam uses a higher-end bourbon, a single packet of sugar, a few shakes of Angostura Bitters, and a muddled cherry and orange wedge.

And therein lies his secret. For about two minutes Adam is muddling the fruit and sugar into a thin mush that when shaken violently with ice and whiskey blends the separates into a whole that provides equal parts bourbon (at the front), sweet-earthy bitters, and hints of the fruit at the end.

It’s a great drink that takes about five minutes to make, but is so worth making.

The other master of the Old Fashioned is Brandon Ristaino, the bar program manager for Temple Bar Concepts in Los Angeles. At the Townhouse in Venice Beach he showed us a more modern approach to the drink.

Brandon doesn’t shake it, he stirs it with a specially made, ultra-dense ice they have brought in and cut just for their program. After stirring, Brandon pours the drink over a large cube of the dense ice, then flames an orange twist and rims the glass with the oil.

Obviously, Brandon’s technique has a lot of the more modern characteristics, but some would argue they’re as old as bartending is, only making a comeback. Certainly the elements are impressive. The dense, large-format ice resists melting and diluting the drink. The flamed orange twist likewise doesn’t dilute the spirit but quickly infuses the drink with the essence of the orange.

Yet the simplicity of Adam’s method will likewise fill your heart with joy.

Two bars, two completely different approaches to making one of the most classic cocktails on the books. And both are absolutely perfect.