Soon you're going to be attending holiday parties, or maybe throwing one yourself, when you do, you'll want to make sure that you're serving the best drinks of the holidays. Sure, you can make a cranberry-tini if you want, but for us it has to be something traditional. We put together a roundup of some of the best recipes out there for making delicious traditional holiday drinks. Make them for a party, or just for yourelf on a chilly night - they're gauranteed to keep you warm! 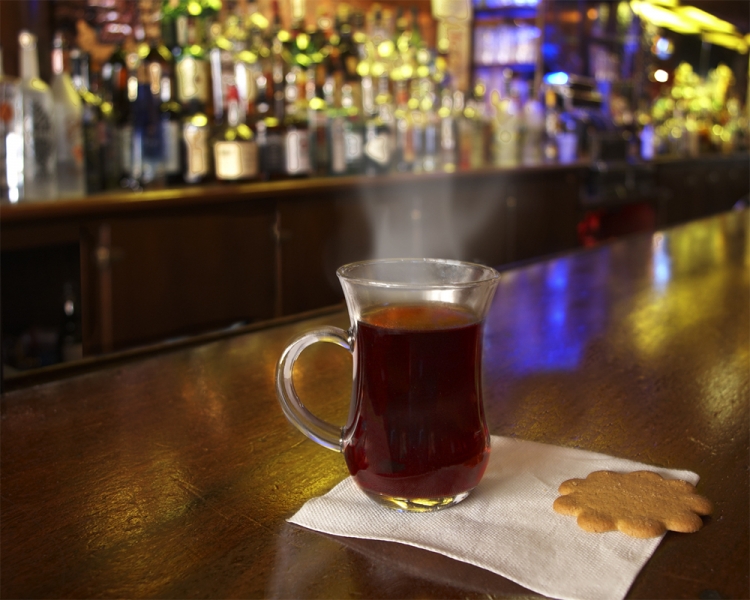 Glögg us similar to mulled wine but with origins in Scandinavia. Pronounced “glugg” it is far less sweet than the traditional mulled wines, like wassail, that we normally associate with the holidays. The drink dates back to the 1500s when it was popular as a restorative and thought to have healing properties. They were on to something. Try a warm glass of glögg after being outside in the snow all day!

Like the other drinks on this list there are a myriad of places that serve glögg , but one in particular we think is the place to go. Simon’s Tavern in Chicago, Illinois was opened by Swedish immigrant Simon Lundberg during prohibition. It has since become a popular watering hole in this neighborhood that once consisted mainly of other Swedish immigrants.

When current owner Scott Martin bought the joint from the founder's son, he insisted that Simon’s original glögg recipe be part of the deal. It didn’t happen (family recipes are closely guarded secrets). Instead though, Scott uses his own family recipe, which, like Simon's, is not shared. You’ll have to actually go to this storied bar to taste it yourself. The trip will be worth it though to see the speakeasy downstairs and the other unique features of the place.

Though we can’t give you the recipe for the glögg at Simon’s, we can share another recipe so you can try it yourself.

Preparation:
1. Heat the wine and brandy, spices, fruit, and nuts in a large pot.
2. Let it simmer for about 45 minutes (be careful not to let it boil).
3. Strain through a cloth to remove all spices, fruit, etc..
4. Serve hot with raisons or almonds. If you'd like the drink to be stronger, use more brandy. 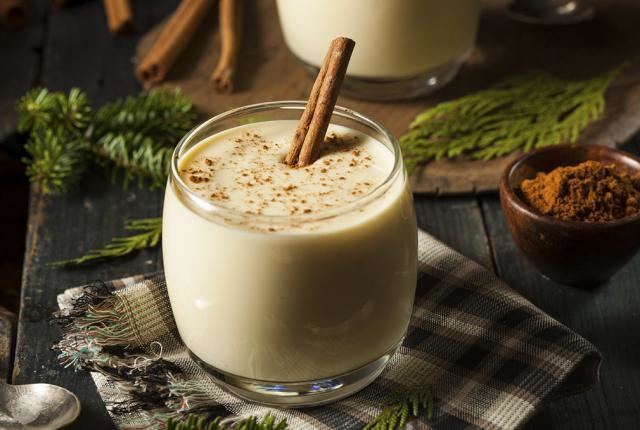 The holidays seem somehow incomplete without this sweet, creamy concoction in the fridge. Eggnog actually dates back to the 14th century, and was at one time a drink consumed only by the aristocracy. It became popular in the American colonies in the 1800s and the more expensive spirits consumed by the rich were replaced by rum—the drink of the commoner. It was one of the most popular holiday drinks found (even George Washington had a personal recipe).

Today, if you’re in the mood for this custard-like drink, you need to head to Sun Liquor in Seattle, Washington. Erik Chapman, Bar Manager and Head Distiller for this small craft bar and micro-distillery, decided about eight years ago to make a small batch for their customers on Christmas Eve. He put the 2-3 gallons he made into a punch bowl on the bar and it was gone in no time.

That gave him the idea to repeat it the following year, only he made a bit more. Again, people flocked to the bar and finished off every drop. Fast forward and in 2012 Erik and his staff made 250 gallons of eggnog: none was left by the time they closed. They still only serve it two days a year (Christmas Eve and Christmas), making it something his customers look forward to, and also pitting it explicitly against the 3-month long “Christmas season.”

Erik says that customers line up before opening just to try a glass, so get there early. But, if you can’t make it to Seattle, below is Erik’s recipe for 2012 (they change the spirits out yearly to give it a bit of a different taste so this year’s will be different). Erik added that the two important elements are in making sure you separate and whip the egg yolks and whites by themselves, and that you let it rest for at least a few weeks.

Preparation:
1. Separate egg whites from yolks and place them in separate bowls. Beat the yolks with an electric mixer until pale yellow.
2. Slowly add the 1/8 cup sugar. Mix for 30 seconds, then slowly add brandy, bourbon, rum and milk.
3. In a separate bowl, beat the egg whites until soft peaks form. Add a tablespoon of sugar and mix for 20 seconds.
4. Add the egg white mixture to the yolk mixture.
5. In separate bowl, whip the heavy cream until soft peaks form and add it to the egg mixture.
6. Spoon contents together loosely and store in glass container in the back of the refrigerator, making sure it’s 45 degrees or colder.
7. Don’t open or mix the jar. Let it sit for at least a week. Sun Liquor suggests aging closer to a month.
8. When ready to serve, mix the eggnog with hand mixer and serve in chilled coupe. Top with a pinch of fresh ground nutmeg. 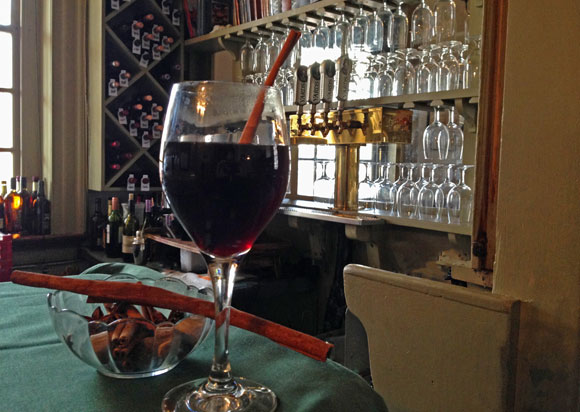 One of the oldest of our traditional holiday drinks, the origin of this mulled wine dates back over a thousand years. The name stems from an Old English greeting, "was hál," meaning “be in good health.” The greeting evolved into a toast with an accompanying beverage, known over time as wassail. Wassailing was a tradition of the townsfolk of southern England, who would parade through apple trees while singing in order to ensure a good harvest the following year.

All of this distilled, 1,000 years later, gives us a sweet, seasonal drink that will warm you even on the chilliest of days.

Today, if you want a glass of authentic and tasty wassail, you head to the City Tavern in Philadelphia, PA. Chef Walter Staib, proprietor of the City Tavern Restaurant at this historic landmark, has recreated a period recipe that would have been drunk by the colonial patrons of the City Tavern when it first opened in 1773.

In fact the Founding Fathers who lived in Philadelphia--Ben Franklin, for example—may have enjoyed wassail there just as you can today. They serve the drink only when it’s cold outside so your window is short, but the reward—an authentic, and period recipe in an authentic and period tavern—is worth making the trip to get it. However, Chef Staib, being an understanding soul and knowing not everyone can brave a Philly winter, provided us the recipe for those who simply can’t make it this year (this and many of his other drink recipes can be found in his new cook book, A Sweet Taste of History). 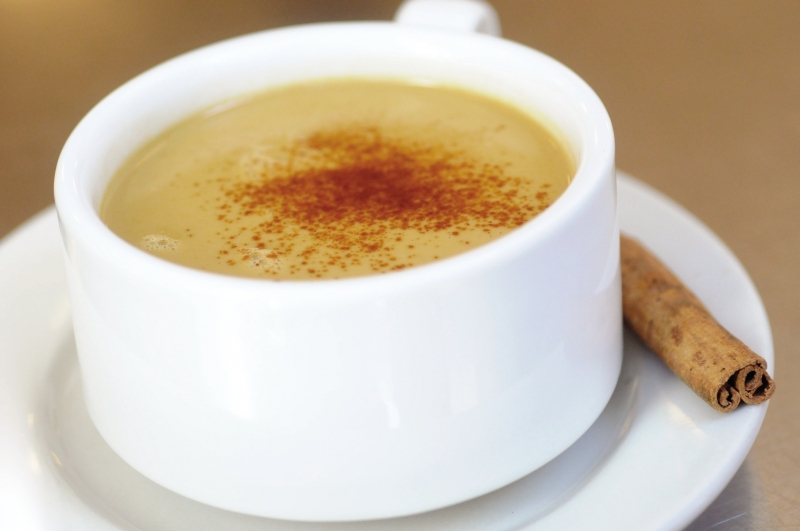 This drink has elements of two popular wintertime beverages: hot buttered rum and hot apple cider. Hot buttered rum has been a popular drink in the American colonies since the 17th century. Think of it as a companion or perhaps period competitor to eggnog at the time.

Apple cider, originating in England, has been a popular beverage for a thousand years and is served summer and winter alike. Spiced cider, the variation typically associated with the holidays, has been around since at least the 12th century. This type of cider, originally referred to as Mulled Cider, is not unlike wassail, but (obviously) uses apple cider as the main ingredient.

The Clinton Street Baking Company & Restaurant in New York City’s Lower East Side is a popular and famous café that serves, according to co-owner Dede Lahman, “simple American classics prepared with the highest quality ingredients using classic French techniques.” One of those classics is their variation on the hot apple cider.

They took a component of another classic—the warm maple butter they serve with their famous pancakes—and used it as the base for their warming, festive drink. The drink, offered in alcoholic or non-alcoholic versions, is served as soon as the temperature starts dipping—October through February—and Dede suggests visitors try it with one of their seasonal pastries. Their maple butter is made by mixing together pure maple syrup with butter. From there Chef Neil Kleinberg was kind enough to provide their recipe for the cider (more of their recipes can be found in their cookbook).

Preparation:
1. In a medium saucepan, whisk together the apple cider, rum, and Maple Butter until combined. Add the cinnamon sticks and warm over medium heat.
2. Pour into 4 mugs (with 1 cinnamon stick each) and garnish with a sprinkle of fresh grated nutmeg.