The term “dive bar” used to be quite disparaging. There was a time when to be found in a “dive” was a bad thing, but that sentiment has mostly gone away. Today, people seek out a good dive bar. They represent a warm crowd, low drink prices, friendly staff and some good stories.

These are places you feel comfortable in. Sure, there might be a hint of danger to them, but that only makes them that much more fun. Spending an evening in any dive bar is a great time, but for National Dive Bar Day, we wanted to give you a list of the dive bars we’ve grown to love since we started writing our Bucket List Bars guide back in 2011.

Since then we’ve been to literally hundreds of dives all over the country, and from all of those in our book, here are the 10 that we enjoyed the most. Are these THE 10 best in the country? No, we’d never make a stupid claim like that (we leave that to other writers), these are simply OUR 10 favorites (and truth be told, Clint wrote this, not Derek, so really these are just Clint’s).

10. The Sandy Hut, Portland OR

Opened since the 1920s (and officially serving booze since the 30s), is this funky dive on Sandy Boulevard in Portland. During the 1950s and 60s the Sandy Hut was the place to be seen in town, and would feature live music, dancing and fine dining. As per usual, though, the place devolved into a grinder joint and hit rock-bottom in the 80s and 90s when it became known as the Handy Slut. Luckily it was bought by a pair of local bartenders who didn’t want to see the place closed. They fixed it up, leaving the charm of the original, brought in live music and gave the old bar a second life. This is a must-visit place in Portland. 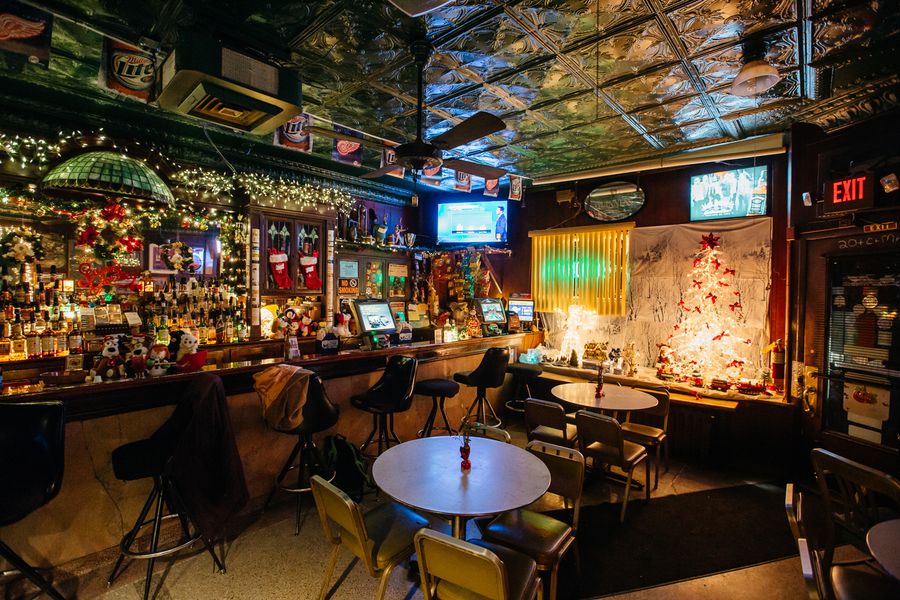 This Detroit dive was opened in 1907 and has been slinging drinks continuously since then, even through prohibition. In 1919, the place was taken over by the Abick family and is still run by the great grandson, Eric Lakeman, making it the oldest continuously family-operated bar in Detroit, and perhaps the United States. Inside you find a cramped room with a low-sitting bar and a pool table in the center. There are some chairs and small tables throughout the room, and a cigar lounge just past the bar. They serve cheap beer and full pours. This is “the one that got away” for us. We visited late on our last night in Detroit and the owner wouldn’t let us film the bar, despite our many pleas. So, while they’re in our forthcoming book they are merely a “notable” and not one of our “featured” bars. In any case, this is our pick for the dive to go to when in Detroit.

Founded in the 1920s as a café when prohibition was going great guns, it quickly became a speakeasy for the small, Swedish suburb of Chicago that houses it. If you give the owner a nickel (seriously), he’ll take you on a tour of this small place that includes a stroll through the basement, complete with the remnants of the original speakeasy. Here you can see tar-stained ceiling and hand painted accents on the walls. This is where the neighborhood men would gather to sip aquavit and play cards after work. Also, be sure to study the huge, mural on the wall. Legend says there’s a number of animals painted into the scene and if you can find them all you get to wear a Viking helmet and drink for free all night.

Opened in 1884, the small bar at the shady corner of 1032 E. Center St. was a Schlitz saloon, or “tied” house in the beginning. It served a city full of thirsty European immigrants yearning for the type of beer they’d get back in their home countries. And they found it at places like this. And as a tied house it lasted right up until prohibition. The bar serves cheap beer and strong drinks, but definitely try a Schiltz, as that’s kind of what started The Uptowner in the first place. The customers are a mixed bag of neighborhood locals, hipsters, blue-collar workers and the occasional rif-raf like us. They’re young, old, tattooed, bald, hairy, black, white and everything in between. It’s the melting pot of the city. You’ll have a wonderful time here, of that we’re certain.

Joe and Stella Sobchik originally opened Atomic Liquors in 1945 as “Virginia’s Café.” It was at the end of World War II and they quickly realized two things: rationing during the war limited their access to quality food items, and Joe would rather make cocktails than cook food (much to the appreciation of his patrons). As such the café began to slowly morph from an eating establishment into a bar. During the 1950s it became vogue to, on nights when the wind was just right, grab an “Atomic Cocktail” and climb a ladder to the café’s roof to watch for mushroom clouds on the horizon (hence the name of the bar). Today, though, the bar has been taken over by a group of local businessmen who have spent a significant amount of time, effort and money restoring this iconic bar to her previous glory. They do serve fancy cocktails, but they also serve the stuff for lowlifes like us. You can get some of the cheapest drinks you’ll find in the city right here, but you can also get the expensive stuff if you like.

Rosa’s was opened post-prohibition in the early-1940s under a different name: Los Tigres. Then, in 1957, the owner, Beto Zubia, changed the name to “Rosa’s Cantina” for reasons still a bit unclear (rumors swirl about an affair with a waitress named Rosa, but nobody’s going on record). Then, according to legend, a tired country singer named Marty Robbins, on a drive between Nashville and Phoenix, stopped in front of the small saloon to stretch his legs. As he walked around the closed bar he reportedly looked through the windows, surveyed the surrounding area (the “badlands” of New Mexico are directly across the street from Rosa’s) and then finally got back on the road. By the time he and his band had arrived in Phoenix the ballad, El Paso, was complete. Today, Rosa’s Cantina is a great dive with international renown, cheap drinks and lots of tequila. This place should definitely be on your list of dives to visit.

The famous Pantages Theater on Hollywood Boulevard was built in 1930 to house live vaudeville performances and first-run movies—though after a couple of years they dropped the live acts and focused on cinema. Just off to the side of the theatre was a small room for entertaining. Before 1933 the room was opened to only the VIPs of the city, where they could have a drink before or after catching a show. But then, in 1934, the room which still retains its stairs leading to the now sealed off lobby of the theater, formally became a bar called The Frolic Room. Perhaps the Frolic Room became most known in 1946 for one of Hollywood’s most tragic stories: the brutal and unsolved murder of Elizabeth Short, better known as the Black Dahlia. According to reports, Short was a regular patron of the Frolic Room, and had visited just before her death. It gets crowded at night, but if you make it take the time to look around at the small details that make this place an icon, like the 60’s era wallpaper and the wall of celebrity photos.

Opened in 1933 after the repeal of prohibition on beer, El Chapultepec (or, the Pec) started life as a Mexican Cantina. It served (and still serves) traditional Mexican fare, such as tamales, burritos and the like. They’ve also served cold beer and drinks since they first opened as well (they have the oldest original Coors account in the state). But what really changed the place was the day the founder’s son-in-law took it over. Jerry Krantz, the eventual manager of the bar owned by his wife’s dad, was a fan of jazz. And, so instead of the typical Mexican-inspired live music that constantly played in the small saloon, Jerry began booking piano players and jazz ensembles. By the 1980s it was the most famous jazz bar in the world, booking acts like Wynton Marsalis and Duke Ellington. Though Jerry passed in 2012, his spirit lives on. They still have live acts, cheap beer and strong drinks.

Founded in 1933 by Felix Silva, Silva’s is best described as a small, neighborhood bar along the old Route 66 in Bernalillo, New Mexico. It is a beloved stop for locals from the surrounding communities of Rio Rancho and Albuquerque. It’s so loved, in fact, that it usually fills to capacity every day starting at about 5:05 pm during the work week. The walls of the bar are lined with mementos of past customers. Cowboy hats, stained with years of sweat from a life of hard work, hang from the ceiling. Pictures and driver’s licenses are pinned to the wall in a haphazard sort of organization. Silva’s is a welcoming place. It’s a place that judges you only by the way you act toward the people around you. The drinks are cheap and the people are warm and friendly. You will feel at home here in no time. It is a special place and we urge you to try to go if you can.

Tucked into a sleepy Uptown neighborhood, just a stone’s throw from Tulane University, Snake and Jake’s looks like little more than a shack. And truth be told, that’s about what it is. But, upon entering, once your eyes adjust to the darkness, you’ll find an inviting and friendly gathering place for locals, students, business people and the occasional celebrity. There’s not a lot of history found about Snake and Jake’s. It just seems like one day it appeared here. In a sense you could say the place was and is as much of the neighborhood as any of the houses that surround it. You’ll notice when you get here the many things that makes this place unique. You’ll notice the only lighting is provided by Christmas tree lights. You’ll notice drinks are no-nonsense and that the house beer is Schlitz. In a country increasingly filled with cookie cutter bar and grills, or Erin go Bragh copycat Irish pubs, a place like Snake and Jake’s, a place as absolutely unique as any saloon can be, is a refreshing and rare find.