The upshot of all this was to understand that making booze – regardless of the kind – is not necessarily easy. There is a lot of shit to be bought, for example. For beer there are carboys, airlocks, and a dozen other little necessities. For distilling there are likewise a number of contraptions to be bought and used at some point in the process (so we’ve heard).

And in either case we learned that the process is precise. Exact measurements in weight or volume are called for. Sanitation is a priority, as any little microbe can foul up the whole batch of whatever it is you make.

In other words, making anything with which to get drunk is not easy.

Then we stumbled across Pat Mack’s Brew Caps. 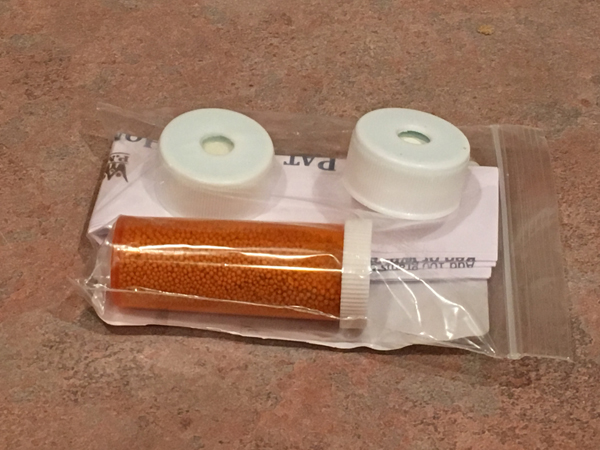 Pat Mack is apparently an English chap who promises that with his little magical devices you too can make a batch of high-quality, tasty and very alcoholic drink for pennies on the dollar. He promises that it’s easy, that it takes little time and that you’ll thoroughly enjoy the results.

To say we were skeptical is to be putting it very lightly. Frankly we called BS.

So we decided the only way to know for sure was to order some and experiment for ourselves, and that’s what we did.

We both ordered the 3 – cap packs. Plus, we ordered another 5 cap pack to distribute to friends so they could get in on the fun. The packages showed up about 1 ½ weeks later, marked with their various customs stamps. The cost of the 3-pack with international shipping came to 11.78 pounds and the 5 pack came to 14.78 pounds, which works to $14.36 and $18.02 respectively.

The “kit” consists of the caps (though Clint’s 3-pack kit was one light, you hear that Pat?), a small bottle of yeast (essentially distiller’s turbo yeast) and a single page of instructions all sealed in a Zip lock (two bottles of yeast for the 5-pack). After your order you are also sent an email allowing you to access and download his “e-book” (a PDF document) with information and recipes.

The caps themselves really aren’t that much to look at. Pat took the caps from what in the US are 2-liter soda bottles. He cut a small circle in the top of each and then shoved a small rubber circle into the cap so that it fits snug just at the top. Then he cut a small slit in the rubber where the circle in the cap is. The effect is to make a pressure valve. As pressure builds up in the bottle from the brewing process it gets released through the valve, but it doesn’t allow bacteria or dust to settle back down into the liquid. 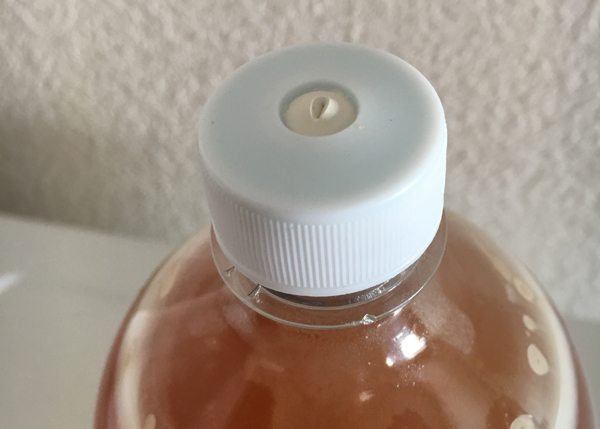 Okay, so this is how we approached this. We decided to distribute the caps to our friends and asked them to try one of the recipes in the book. Curtis decided to try making beer with the Brew Cap, Wes decided to make the Mead, Derek made Elderflower Champagne (yes that’s one of the recipes) and Clint made the Ginger Beer.

Making the Ginger Beer was not all that easy. It required 40 grams of grated ginger, boiled with a cup of sugar, cream of tartar and lemon. Once cooled Clint added about 20-30 “balls” of yeast to the bottle and mixed it all up. He then placed it in a dark warm place for two days before then filtering it all into another bottle. That bottle was then placed in the dark again for about 9 days.

The Mead called for about 9 ounces of honey, the juice from one lemon, a cup of apple juice and 1/2 cup of sugar, plus about 15-30 of the little yeast balls. Wes placed the bottle in the dark for a good two weeks before pouring into different bottles.

Curtis diverged from Pat’s recipe completely and made a from-scratch beer recipe – boiling grain and all the rest. He did use Pat’s yeast and cap but the rest of it was all his own recipe.

Finally, there was Derek’s champagne, which required 30 elderflower heads, sugar, vinegar, and lemon juice. All of this was boiled and then mixed with yeast and set aside for a week, poured through a sieve and then set aside for another week. 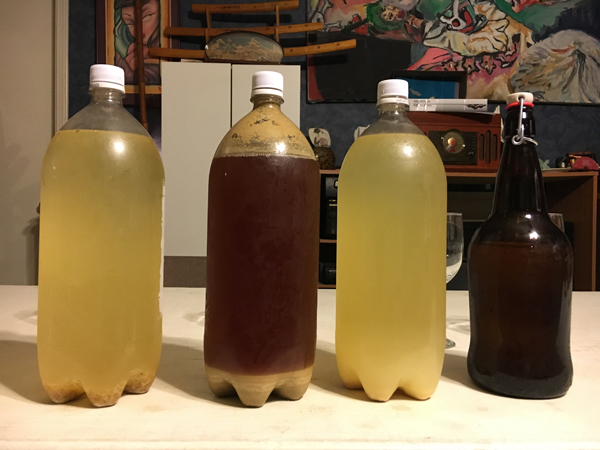 The outcome? The ginger beer was flat and super sour, with very little alcohol (we didn’t measure it, we just didn’t taste any). The Mead was sweet, had more of an apple juice taste but had a good alcohol presence. The champagne was very sweet but had a generally good flavor. And finally the beer…tasted like beer. It wasn’t bad at all, with a good head and flavor.

In general, these weren’t bad creations, but they weren’t the best either. Once all this was said and done though, Clint made the first recipe in Pat’s book – Turbo Apple Cider. This is probably the easiest and most straightforward. It calls for 1 1/2 liters of apple juice and a cup of brown sugar. Mix these, add the yeast and let it sit for about a week. The cider actually turned out delicious, with a great crisp apple taste and just enough carbonation. If we were going to use these Brew Caps regularly, this is what we would use them for.

In ending, yes these caps do work. After you get them you’ll see how easy they were for Pat to make and then you’ll probably make some more for yourself. Or, perhaps just stick with what you get. Try some of the other recipes and let us know how they turn out – we just don’t have the patience to wait 6 months on a 2-liter soda bottle full of wine.