You really have to search to find the oldest bar on the Las Vegas Strip. The oldest bar in Las Vegas is different, that’s Atomic Liquors down on Fremont Street, but the Strip presents a problem.

You see the Strip changes almost daily. Buildings are built and then knocked down, sometimes even before completion. If a building isn’t knocked down it’s remodeled. All of this to keep up with the newest trend, the latest look, the current feel.

So finding the oldest bar is difficult. You can search the oldest casinos on the strip – the Tropicana maybe, or perhaps Circus Circus (it used to be the Riviera but alas it is the latest to succumb to old age). But they’ve been changed so many times that nothing you see is original.


But if you’re looking for the bar that’s been around the longest, the place to go to is the Peppermill.

The Peppermill Restaurant and Fireside Lounge was opened on December 26, 1972. It was a helluva Christmas present to Sin City. It features a full restaurant on one side, and an intimate “fireside” lounge on the other. 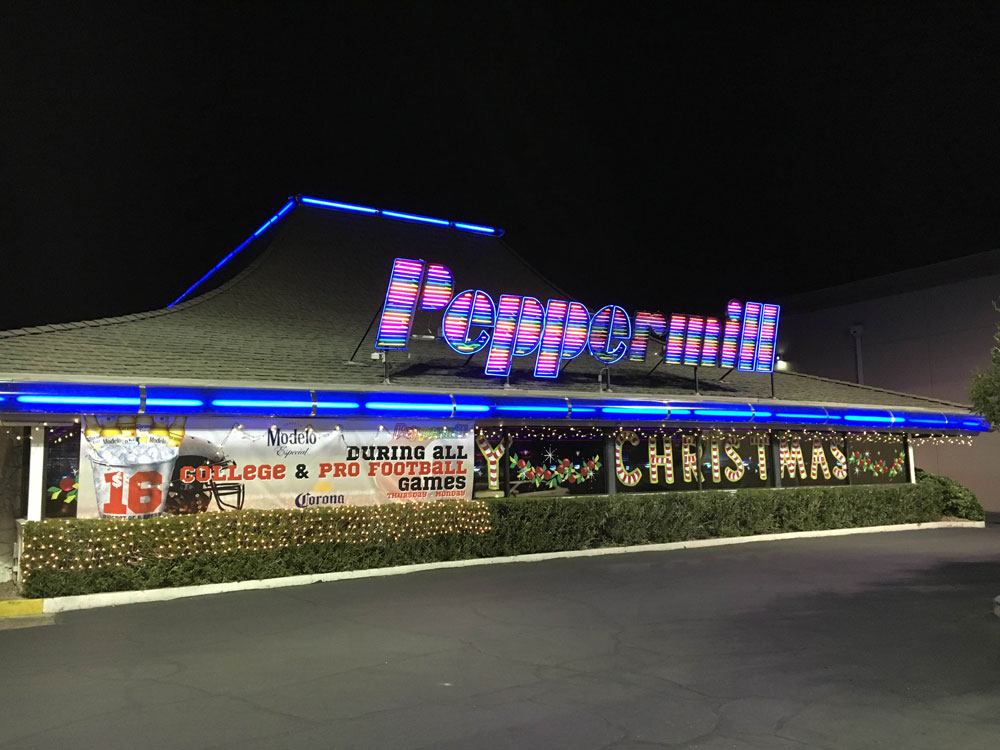 And by “fireside” lounge they mean you sit next to a roaring fire. If you like intimate, sexy settings, this is the place to sit. Especially in the winter, sitting here is warming and the flames are almost mesmerizing as they dance and shimmy in front of your drink. 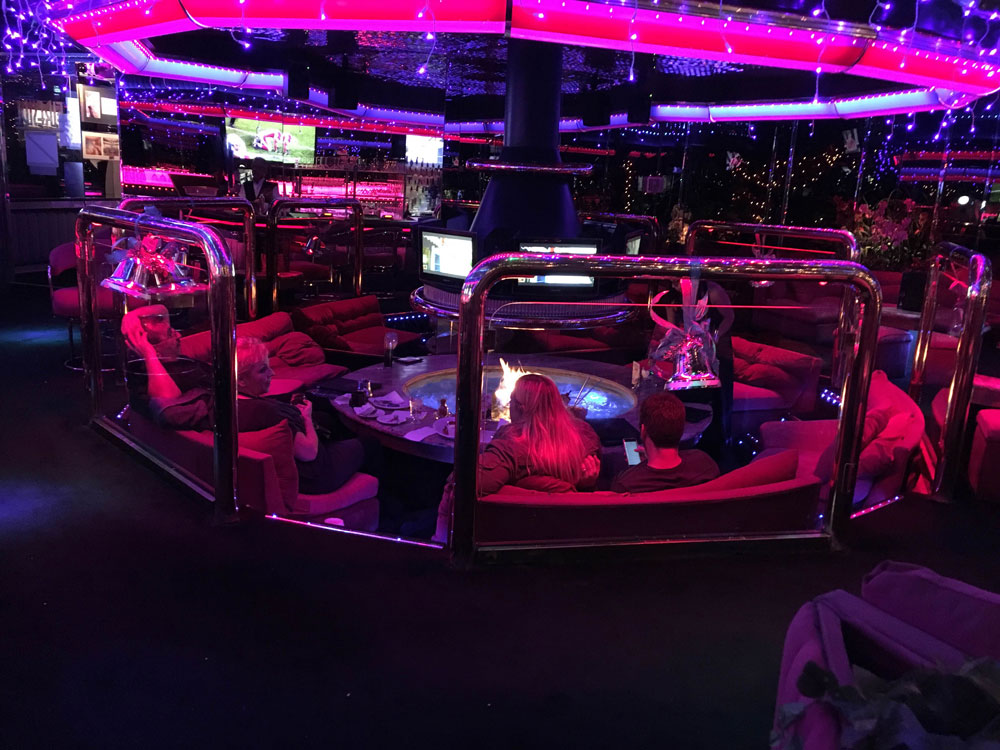 The rest of the lounge is darker, more mysterious, perhaps a bit more dangerous. The booths towards the back, awash in the glow from pink and blue neon but still dark enough to really hide faces, remind me of the type you’d see on an old Miami Vice rerun, plopped down from the kind of lounge that narco-runners would be found making deals at on Miami Beach circa 1984.

And in truth, that’s actually happened here, sort of. The place has been in a number of movies, including Casino and Showgirls, both needing the perfect setting that screamed “risqué” and “danger”. They found it here. 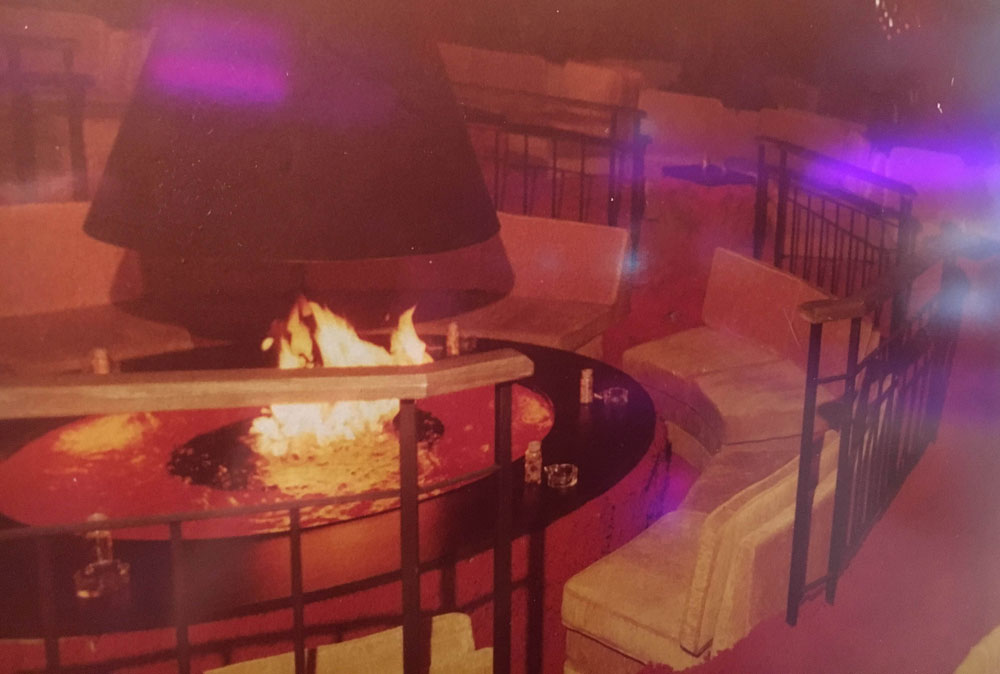 (The Fireside Lounge when it opened in 1972, not much has changed.)

They have a full bar and feature a number of specialty drinks, including a long list of libations influenced by the Tiki craze that was fading when this place just opened. Their signature is a Scorpion Bowl, which boasts 64 ounces of booze and juice. Sip one of these next to the fire with your date and you’ll be bringing them home. 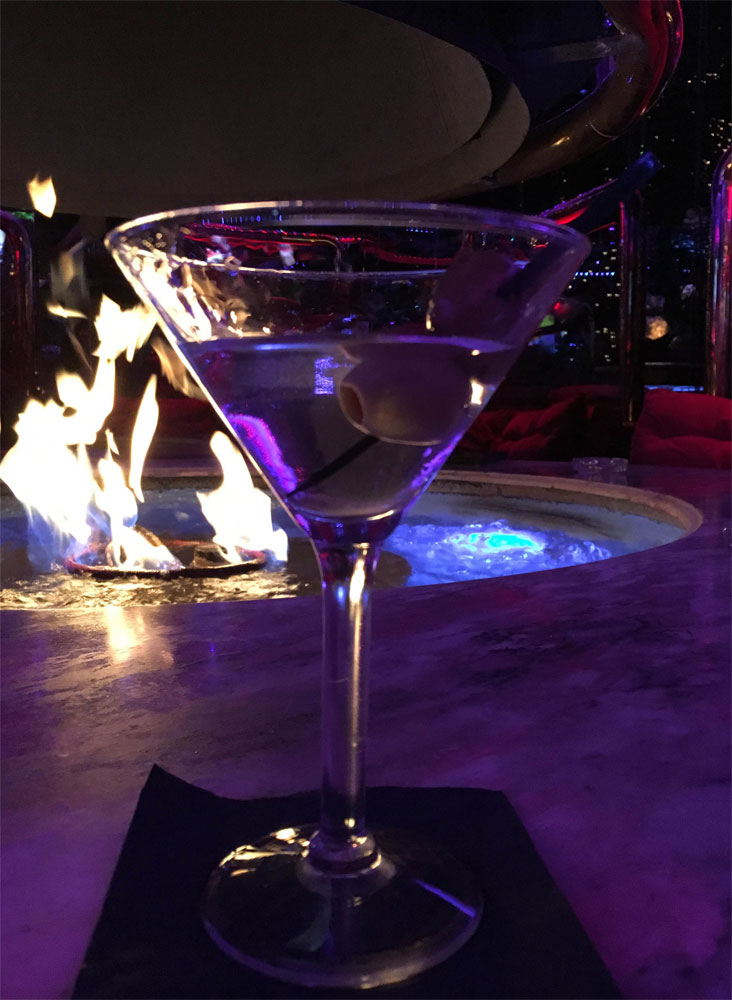 I chose a classic vodka martini – which is almost cheating as they’re kind of hard to screw up. But honestly I felt like I had to considering the pedigree of this place. It’s had Frank Sinatra, Dean Martin, and all the rest in its confines, sipping the same drink I was sipping. I felt some kind of connection.

In the restaurant you find breakfast served all day and other diner-type faire with some steaks and other heavier meals as well. It’s not a bad place to get a bite to soak up all the booze you just drank in front of the fireplace. However, the lounge itself also serves a number of appetizers that pair well with both the drinks and the ambiance.

So there you have it. The oldest bar on the Las Vegas Strip really isn’t that old, but it is a great trip to the past and should be on your list of destinations when you visit Sin City.

Where: Peppermill Las Vegas (Peppermill Restaurant and Fireside Lounge), 2985 Las Vegas Boulevard (next to the now defunct Riviera and about two blocks north of the Encore).

When: Open 24 hours. Be warned, as with many places in Las Vegas, when you enter there are no windows and you have no idea what time it is or how much time you’ve spent there.

What to order: Something classic like a martini or whiskey on the rocks, or one of their signature drinks like a Scorpion Bowl.