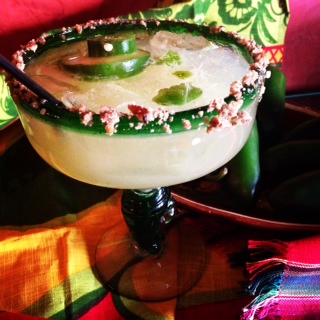 Few drinks have come to symbolize a particular day like the Margarita on Cinco de Mayo. In truth the two have very little to do with each other. The day represents a victory by Mexican troops in an obscure battle with French troops in the 1800s.

The drink, on the other hand, was developed in the 20th century—nobody knows for sure but people generally agree in the 1930s-1950s timeframe—and may have been created in Mexico or just along the border with the United States (there are about 3-4 different origin stories).

However, the two have become synonymous with the early May fiestas that people throughout the US and Mexico throw. In the next few days every bar or liquor-serving restaurant will feature Cinco de Mayo specials that include some sweet/sour cocktail with a bit of tequila in it. They’ll call it a Margarita, but it’s far from it.

The real Margarita recipe is stronger than most knock-off recipes, and far less sweet (you can find the real recipe here).

However what is fun this time of year is seeing the many variations that places invent. The subtle and not-so-subtle ways of changing a few ingredients to make a Margarita-based cocktail with new taste and texture experiences are almost infinite.

Here we’ve included one of our favorites. This is the Mesilla Valley Cucumber Jalapeno Margarita created by the restaurant La Posta de Mesilla in southern, New Mexico.

First a bit about the restaurant. La Posta de Mesilla was founded in 1939 by a member of one of the oldest families in the area. The town dates from the early 1800s and the building housing the restaurant has been sitting there also since the early 1800s, when it served as a stagecoach stop and later a hotel. The place has seen the territory influenced by five different countries (Spain, Mexico, Austria, France and the United States)—in other words it’s a fitting source for a new drink on one of Mexico’s biggest days.

The drink itself, created in the restaurant’s new “Adobe Cantina y Tequileria” blends locally-sourced ingredients to make a refreshing and spicy variation on the classic Margarita. We hope you enjoy!