James and Yolie here, back in the USA after a week in the north of Ireland and Northern Ireland.  For this adventure we went via a Globus Travel bus tour along with 44 strangers (now friends), and we had an amazing time!  We had overnight stops in Dublin, Galway, Letterkenny, and Belfast plus loads of other interesting detours along the way.  Our tour guide, Kevin, and driver, Jurgen, took great care of us.  They maximized our tour time while what seemed like herding a bus load of cats, all the while educating and entertaining us along the way.  Our kids when they were younger would have called the tour funducational. 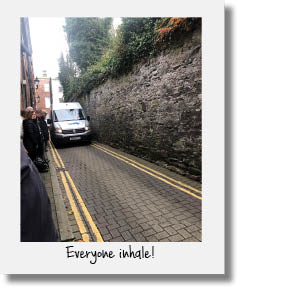 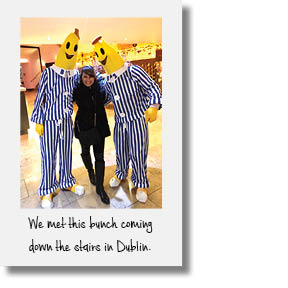 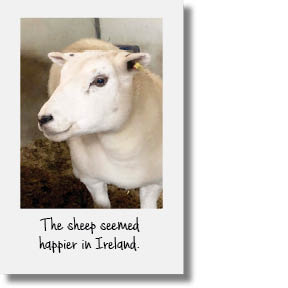 First, some general reactions.  Weather wise there were three conditions: about to rain, raining, and finished raining.  But seriously, we had some clear sky periods, and it wasn’t as cold as we anticipated.  Actually it was pretty similar to our typical Maryland November.  Second, the Irish people are incredibly hospitable.  They are gregarious, intelligent, and a hoot to drink with.  Yolie now wants to be reincarnated as an Irish lass.  Third, people say the Guiness is different and better in Ireland.  We heartily agree!  Guiness is good stuff anywhere, but in Ireland it is absolutely heavenly.  Most of the other brews we sampled were fairly pedestrian, though you could always get a good Smithwicks, a refreshing Rockshore, or an Orchard Thieves Cider if you wanted a break from that dark foamy elixir made perfect through 260 years of brewing love. 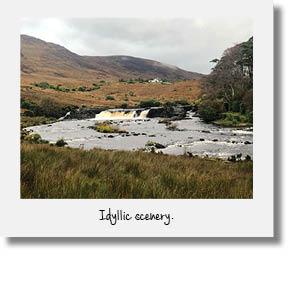 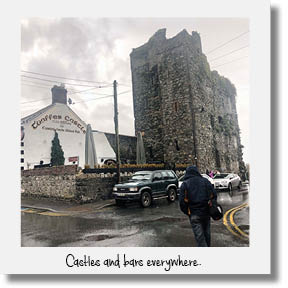 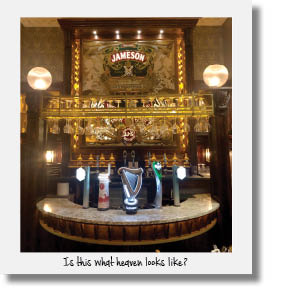 There were also a couple of other interesting bar notes.  Bartenders did not expect tips like in the states, but if you did tip you earned major points.  Also of interest was that liquor is typically dispensed using something you might see in Chemistry 101.  Hence, free pours are rare and every neat whiskey is the same volume everywhere you go. 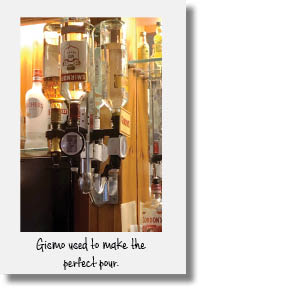 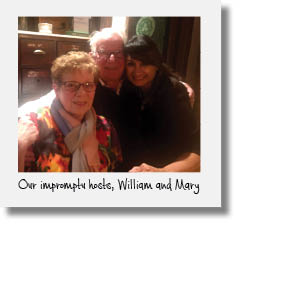 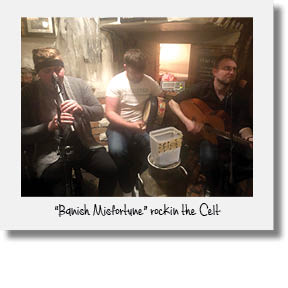 The trip was full of good times and good cheer, or as the Irish say, good crack.  There was too much packed in to cover here so I’ll just hit the highlights.  After arriving in country, a quick tour of Dublin to get our bearings, and a welcome dinner with our traveling companions, we hit the street to find adventure.  We found it in The Celt (https://www.thecelt.ie/).  The place was jammed!  We boldly invited ourselves to join a table inhabited by local couple, Mary and William.  That bit of courage turned out to be a stroke of genius.  In a little while the piped in music from god knows where stopped and then it was open mic time.  A couple of gents proceeded to sweetly serenade the packed and hushed house with touching Irish ballads.  Unbeknownst to us this was just the warm up while a three piece band set up in the corner.  After the impromptu emotional interlude the trio of guitar, bodhran drum, and tin flute player got things cranked up.  What a freakin experience!!!  The band got the Saturday night crowd rollicking.  Next thing we knew locals were duel stomping on the tables, a guy was down to his Joe Boxers standing on a chair while another patron stood on a table and played the spoons on Joe Boxers head.  With this our new friend Mary said dryly:  “Aye, you won’t see that in Maryland.”   James couldn’t help himself and had to get his hand, uh head, into the act.  He jumped up and added his coconut to a couple others as the table mounted spoon player rocked out, getting a different sound from each patron’s noggin.  Just crazy!  Aye, it was great crack! 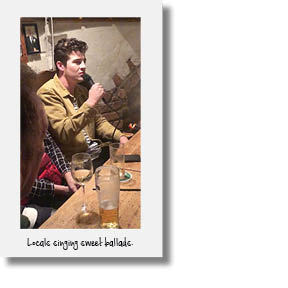 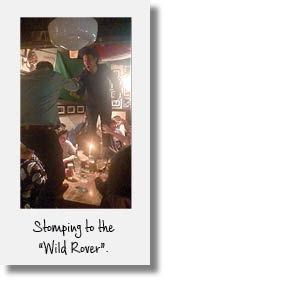 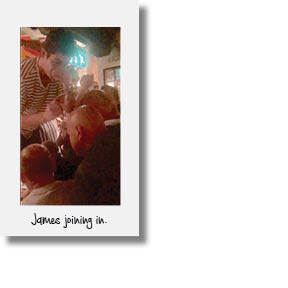 Wth each stop we went looking for more of this Irish magic.  We found that many bars had no music, while others would have a solo or duet playing familiar covers usually to a sparse and somewhat disinterested crowd.  However, we would occasionally stumble into a packed joint with 5 or 6 musicians in the corner playing whatever they felt to the delight of the locals.  The Globus travel itinerary allowed us the opportunity to visit the oldest bars in Galway, Belfast, and Dublin.  O’Connell’s, est. 1862, (http://oconnellsbargalway.com/) in Galway didn’t disappoint.  The bar served the usual array of drafts that included Guiness, Smithwick’s, Rockshore, Kilkenny, Murphy’s, Harp, etc., but it was the pub’s beautiful decor and unique beer garden that made it a stand out.  Kelly’s Cellars, est. 1720, (Kelly’s Cellars  on facebook) in Belfast was a blast.  Jake behind the bar provided the bar's history and he and his crew took great care of us.  The drop-in musicians were entertaining and the locals very colorful.  After the music ended for the night we decided to head back to the hotel.  On the way out Jake gave us a tip to stop in Fibber Magees also known as Robinsons Bars (https://robinsonsbar.co.uk/) across the street from our hotel to check out a band called, Dalriada.  We checked into Fibber’s and the joint was packed and hopping to the trio’s music.  When they finished, Yolie went up to compliment the band on their awesome music...only to find out it was Jake’s dad on mandolin... accompanied by Jake’s grand dad on guitar....and Seamy on fiddle.  The tip was an inside job, but we were most grateful for the lead. 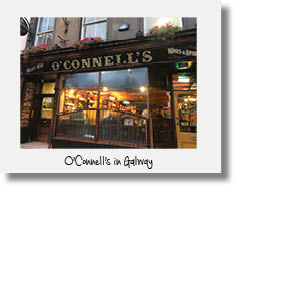 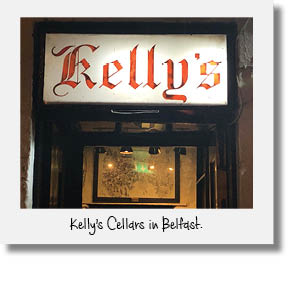 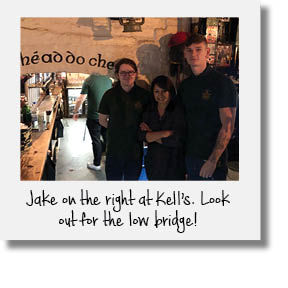 Our last stop of the trip was where it began, in Dublin.  Here we visited the Brazen Head, est. 1198 (http://www.brazenhead.com/).  The Brazen Head claims to be the oldest bar in Ireland.  Of course, there is a dispute, as Sean’s Bar in Althone claims to date back to 900 AD.  On our next trip to Ireland, and there most certainly will be, we’ll go to Sean’s to investigate and report back our findings.  The Brazen Head was super cool with small rooms with separate bars.  Each room had tons of character and all were filled with friendly characters.  Fiona, our attentive barkeep, was a standout.  She informed, entertained, and played photographer all while taking orders, pouring drinks and selling souvenir tweed caps.  We were so sorry to leave the Brazen Head, but we had a bus to catch. 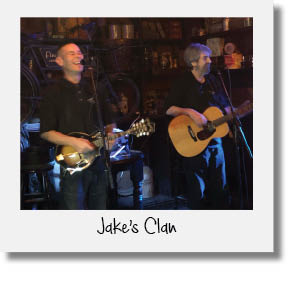 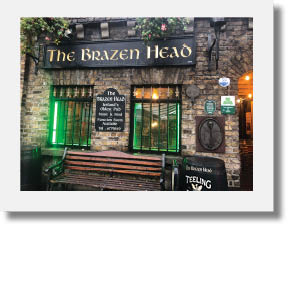 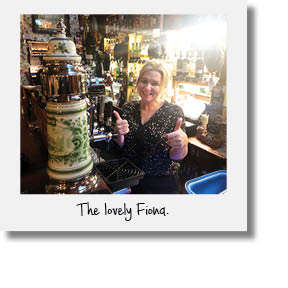 Over the week we did loads of other activities besides hitting bucketlist bars.  We saw shepherding dogs at work, baked scones, visited castles, walked on the Giant’s Causeway (super cool!), toured the Titanic Museum, wowed by Irish step dancers, and experienced tons more.  We had a cracking good time!  And as the Irish say, may you be in heaven a half an hour before the devil knows you’re dead.  So, my friends, we beg of you, visit Ireland!!! 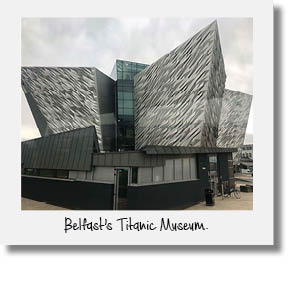 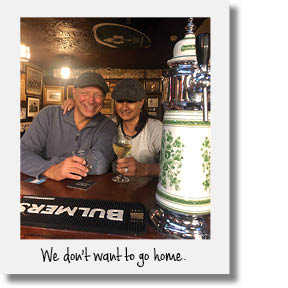