James and Yolie back home after a whirlwind mid-west weekend. We landed at Indianapolis International Airport at eight-thirty Friday morning and by nine we were in our brand new Chevy Malibu rental.  Our first of two primary targets for the weekend was the Knickerbocker Saloon in Lafayette.  The Knickerbocker is the oldest bar in Indiana...or is it?  The Knickerbocker didn't open until 4:00 PM so we had some time to check out downtown Indianapolis.  We were immediately struck by the tens of thousands of fit looking people filling the streets.  We soon discovered it was The Beach Body Coach Summit convention that was in town, so we knew right away it was going to be a great day for sightseeing.  When we travel to larger cities we always take a city tour as soon as we can.  The tour gives us a chance to get our bearings, learn a little history and some fun facts, and most importantly we get leads on great bucket list bars from the tour guide. 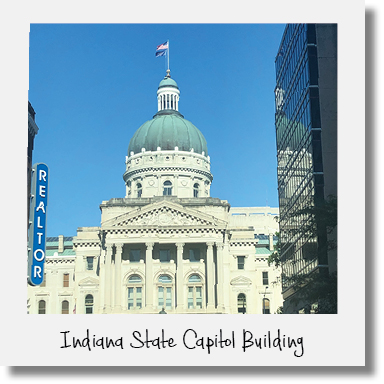 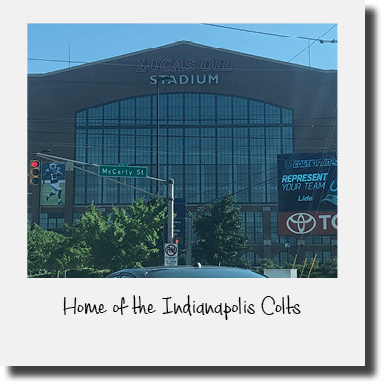 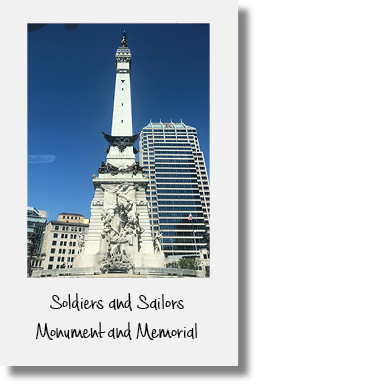 This time we took an Indy Fun Trolley Tour and our driver/guide was none other than Tim the Trolley Man.  Tim did a great job showing us the sights of Indianapolis.  After a quick stop at the Indianapolis Motor Speedway Museum we got the inside scoop on the first two unique bars of the weekend.  Tim clued us in on Saint Joseph Brewery & Public House (540 N. College Ave.) and The Slippery Noodle Inn (372 South Meridian St.), the oldest bar in Indiana.  Whoa!  How can that be?  We headed immediately to the Slippery Noodle to investigate.  Seems that the Slippery Noodle and the Knickerbocker are well aware of each other's claim of being the oldest in the state.  We visited both, they're both great unique bars, and you'll have to decide for yourself the rightful holder of the oldest crown.  The Slippery Noodle is a blues haven and Blues Brothers memorabilia makes up the bar's decor.  The downtown bar happened to be filled that day with Beach Body conventioneers quaffing brews and eating delicious looking lunches.  After putting down a couple of cold Chilly Water Brewing Company drafts, and collecting details on their oldest bar claim, we headed out to our second lead from Tim the Trolley Man, that being the Saint Joseph Brewery & Public House. 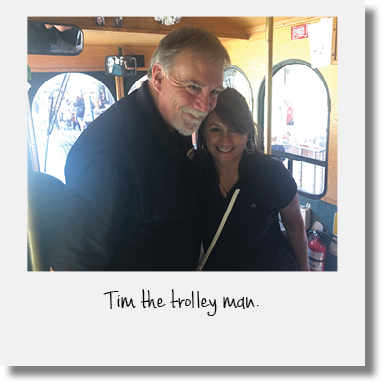 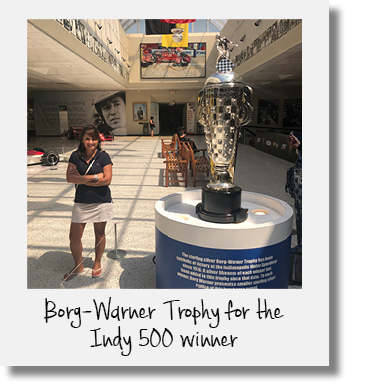 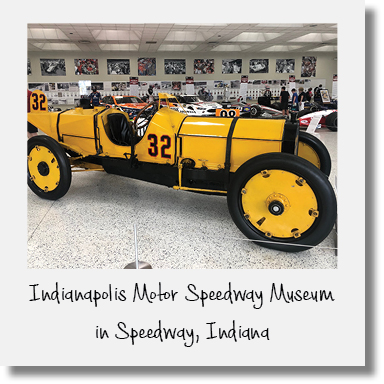 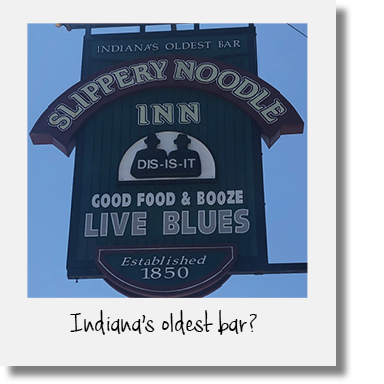 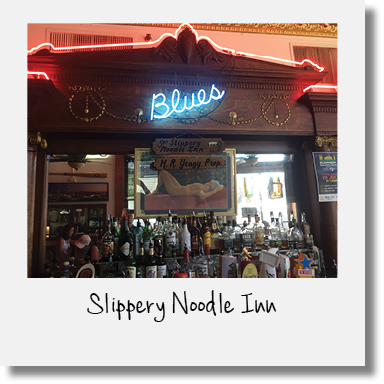 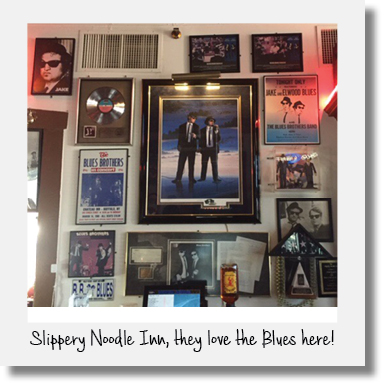 Saint Joseph Brewery is in a former Catholic Church.  The altar area has been taken over by beer vats, but there are still pews and other remnants of its past.  Bartender Jimmy recommended a nice flight selection plus a bonus taster, that being the Dark Angel Black Lager.  All the beers were very tasty, but we have to confess, the Dark Angel would make this James a Saint Joseph regular.  Jimmy took great care of us and the whole staff made us feel right at home.  Thank heavens for Saint Joseph Brewery & Public House! 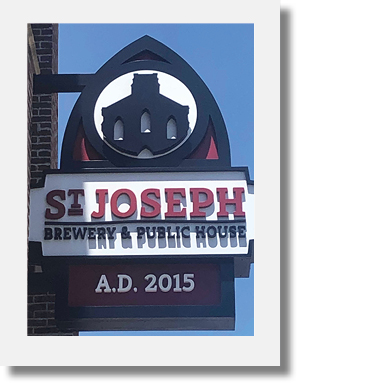 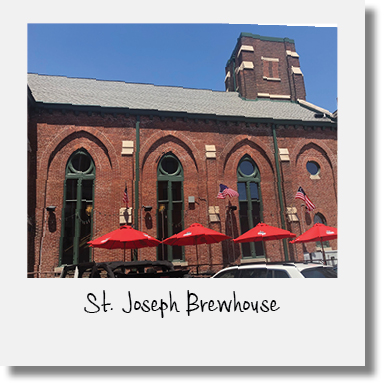 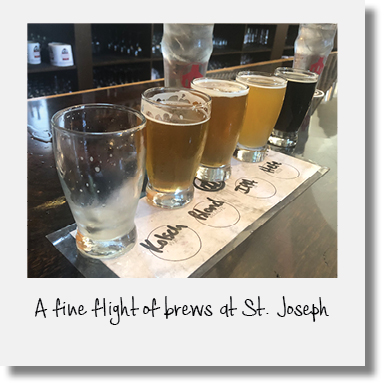 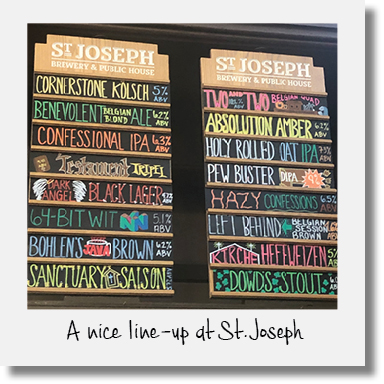 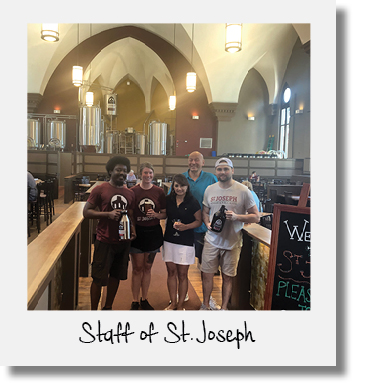 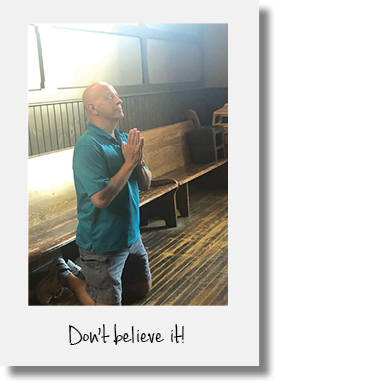 After leaving the brewery we headed 70 miles northwest to Lafayette to find the Knickerbocker Saloon (113 N. 5th St.).  Upon arrival we sadly discovered they did not serve food.  That bag of 12 mini pretzels on the plane was a distant memory, so we needed to fuel up before we could sample the Knickerbocker's liquid wares.  Bartender Kory pointed us to Digbys Pub and Patio's (133 N. 4th St.) back door, which was just across the parking lot and past some dumpsters, to get a bite.  Digbys was a great local joint.  One armed bartender, Richard, mixed up great cocktails, served up good grub, and introduced us to Ol' Tavern Beer from People's Brewing Company.  Richard actually had both limbs but one was in a sling.  One of the regulars at the bar, though, said with a wink that he's been milking the injury for months.  We had a great time with Richard and all the locals.  After making some new friends and with full bellies, we headed back across the lot to the Knickerbocker. 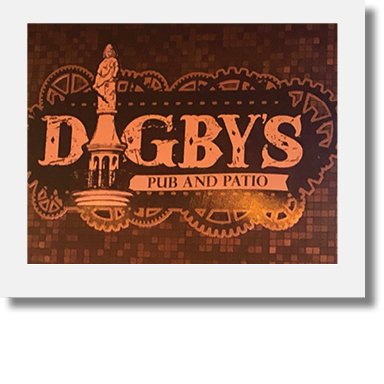 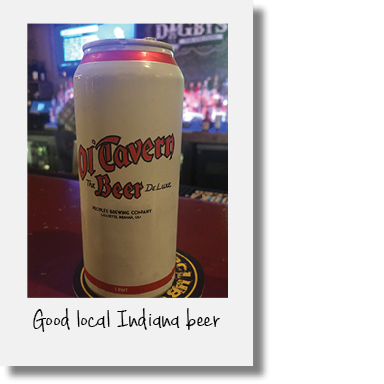 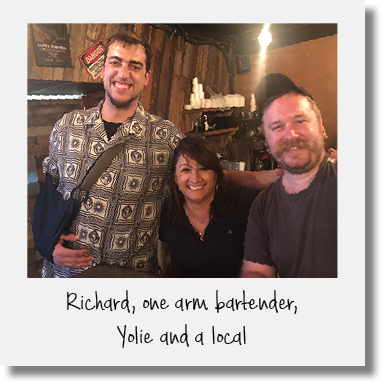 Bartender Kory greeted us again and served us some local drafts.  The Knickerbocker is a good looking bar with two interesting features.  The walls are covered with pictures of the oldest bar in each of the 50 states and the District of Columbia.  We've been to many of the pictured bars and it was evident that the Knickerbocker was proud to take its place among them as the oldest in Indiana.  We know, there's that Slippery Noodle matter, but you can decide for yourself.  The other interesting feature was a piano at the front door with an advertisement for Ryan Rollins the Piano Man.  Besides loving old and unique bars we're suckers for a good piano bar.  As a matter of fact, we met at Middleton Tavern's upstairs piano bar during Maryland piano man legend, Larry Lay's, opening set.  Oops, took a little stroll down memory lane there, now let's get back to the Knickerbocker.  Unfortunately, we had to leave for Michigan around 6:00 PM so we couldn't hang around to hear Ryan.  But, to our great surprise he was sitting next to us the whole time.  Ryan offered to play for us right then!  What a treat!  Ryan took his place at the piano and put on an impromptu show for the handful of customers on that hot Friday afternoon.  Ryan was awesome, but his Hotel California duet with Yolie was the highlight of the set.  Sadly,  we had to leave Ryan after 45 minutes but he was still rocking the joint as we headed out the door. 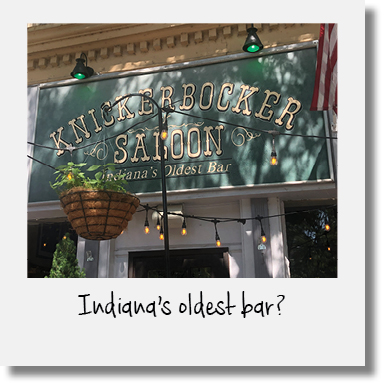 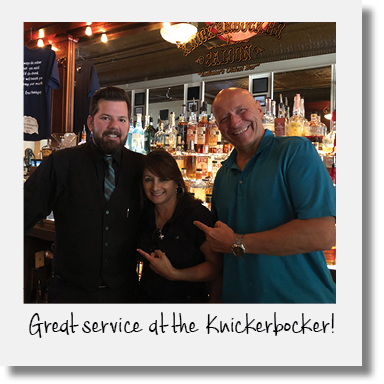 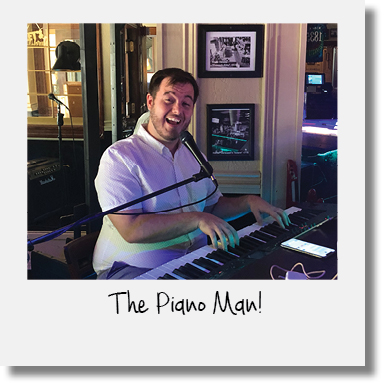 We got back in the Malibu and headed 132 miles north to the Old Tavern Inn (61088 Indian Lake Rd.) in Niles, Michigan.  The Old Tavern Inn is not only the oldest bar in Michigan, it is the oldest business!  The Old Tavern Inn seems far off the beaten path, but it was filled with locals on that Friday night.  The beer was cold, the ham sandwich we ordered was simply enormous, and the small team of bartenders and cooks were crazy busy.  The way they kept surveying the dining room, staying up on their toes, and taking care of the hungry and thirsty crowd was amazing.  Kudos! 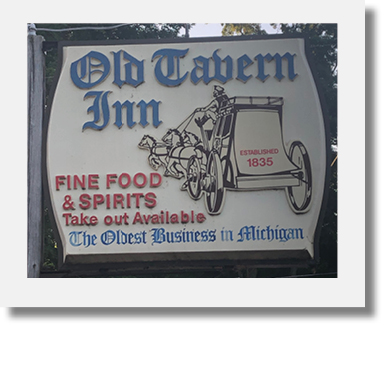 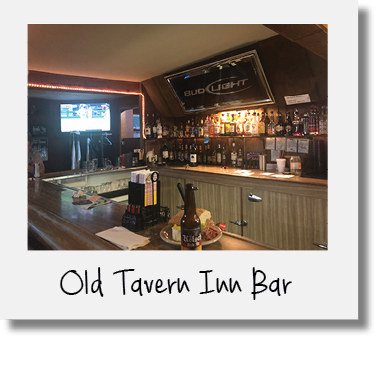 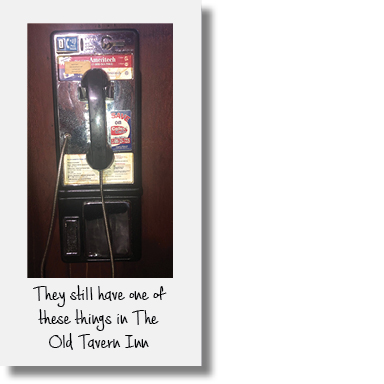 We left Niles and headed 115 miles west to Chicago where we would spend the rest of the weekend.  On Saturday and Sunday we:  experienced the annual G-Fest convention (that's the big Godzilla convention, and yes, there is such a thing); cruised by Wrigley Field; dipped our toes in Lake Michigan; sailed on a Chicago River Architecture Cruise; viewed the city from the top of the Willis Tower; did a Mobster/Ghost Walking Tour; and a whole lot more!  These were all fun activities that naturally worked up a thirst.  During our sightseeing we ran across the Safe House (60 E. Ontario St.).  This just might be the coolest bar we've ever visited.  We found it on Saturday and had to go back again on Sunday.  A double visit, which is a first for us!  We'd love to tell you all about the Safe House, but they'd have to kill us.  My friends, we beg of you, go to Chicago and don't miss taking refuge in the Safe House. 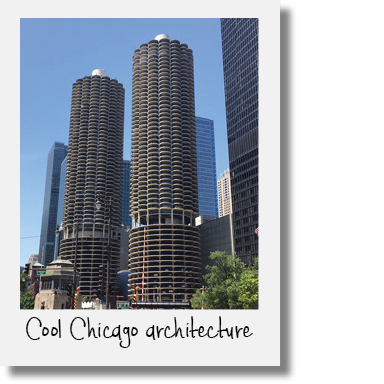 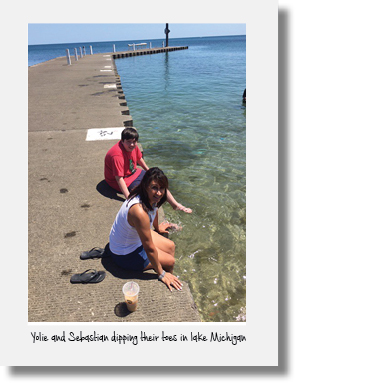 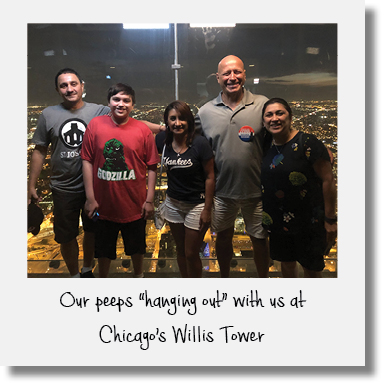 On Monday, we drove the 187 miles back to Indianapolis to catch our flight home.  We made it just in time only to find out our flight was delayed.  That gave us enough time to settle in at The Fan Zone Sports Bar in Terminal B.  Our bartender, Kourtney, was wonderful.  She provided us a couple local brew samples and we decided on a Crook & Marker Tangerine Spiked Cider for Yolie, and a Big Lug Diat 3.7% Pilsner followed by an Indiana City Roulette 10% Imperial Stout for James.  The stout was particularly tasty.  Kourtney's hospitality and good naturedness made the time fly by and it was boarding time before we knew it.  After three states, 763 road miles, two or was it three oldest-in-state bars, one top secret bar, and lots of good memories, it was time to head home and recharge.  Adios for now, we'll talk again after our next bucket list bar adventure in New England.